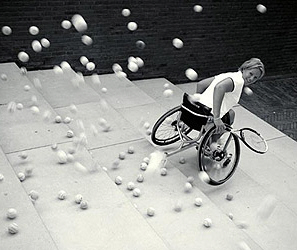 Sexy, athletic, and seated. Yes, these three words can go together, and Esther Vergeer, a 29 year old wheelchair tennis phenom from the Netherlands, is the rolling definition of badassery.

Esther has been in the news lately for winning nearly 400 matches, including the US Open title this past Sunday in NYC. A huge feat in the world of wheelchair tennis. When she’s not busy competiting, she’s a teacher, and runs a foundation that works on character building in children by getting them involved in sports. Read a great article about Esther on Wired – The Best Tennis Player You’ve Never Heard Of

And ever better, watch her in action!