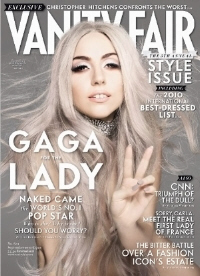 In the September 2010 issue of Vanity Fair, Lady Gaga discusses her Little Rolling Monsters, ie, her adoring fans (me included!) who use wheelchairs, and her use of wheelchairs in her videos. And we have an excerpt just for you.

”Do you think people don’t get your humor? The ‘Paparazzi’ video, which you did with director Jonas Akerlund, shows

you on crutches and in a wheelchair. It’s certainly not politically correct, but I think it’s hilarious. Was that your intention?”

Of course it was. Listen– the intention of that video was to show the hilarity to which people will fame-whore themselves. It was playing with the idea that I knew my style was something that people were really admiring. So I thought, Well, what’s the most ridiculous thing that we could immortalize? Something not fashion at all and make it fashion. And I was looking at a lot of Helmut Newton books and photographs, and there were all these disabled women who looked fabulous. So I thought watching the celebrity fall apart for seven minutes and see what happens. The hilarity of the wheelchair being covered in diamonds.

“Did you get protests from organizations for the physically challenged?”