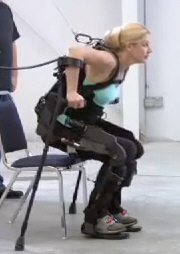 This cutting-edge personal exoskeleton developed by Berkley Bionics will truly make you feel like the future is now.

eLEGS are the offspring of an exoskeleton initially intended for the US military called HULC. The legs operate by sensing  arm movement and moving the legs in accordance. A backback must be worn while using the legs, which is where the important sensors are located. To be eligible to use eLEGS you must be able to get out of your chair on your own and be able to use crutches. So as of yet, only paraplegics can feasibly use this. You also have to be under 200 lbs and have pliably good range of motion in your legs.

Amanda Boxtel (seen above, and also check her out in the video below) is the lucky paraplegic who got to be one of the first people to try out eLEGS. She’s a native Australian and Paralympic skier who was injured in 1992, and is the co-founder of a cool adapted skiing program called Challenge Aspen (love what you had to say in the video, Amanda! You were spot on when describing the innate human need to walk).

Berkley Bionics says they’re working on making the exoskeleton more streamlined and compact (so it’s more suitable for home-use) and hopes eLEGS will be available for purchase by paraplegics by 2013 . A little less than 3 years off. Not too bad.

So how much do you think the eLEGS will cost? While this pesky detail has yet to be released by Berkley Bionics, I’m guessing it’ll be a cool $100,000. What do you wager?

Don’t forget to watch the official video on eLEGS from Berkley Bionics below (it’s a good one).