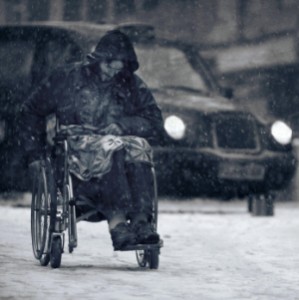 You can not make this stuff up. Two thieves in wheelchairs from Helsingborg, Sweden made the lamest escape attempt ever after stealing merchandise from a storage unit. Their tracks were picked up so easily, “We didn’t even need a police dog,” said local authorities.

LOL. I can respect these guys for having the gumshin to attempt putting on such a hardcore veneer, despite their “harsh physical impediments” and everything, but COME ON. There are just some things you have to realize you can’t do when you can’t walk, like The Time Step (tap dance step), Pogo sticks, and kicking someone in the balls. And thieving and “running” for it? Yeah that’s included, you Norsies.

For more on this flawed escapade —> The Local