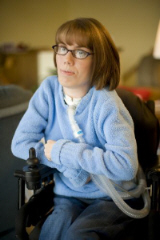 When my friend from high school got kicked off a Delta flight while traveling home from New Orleans, I was appalled. The reason? Her respirator.

Respirator-users have had a hell of a time flying since 9/11. Many uninformed employees think respirators aren’t allowed, ruining many people’s vacations, and in this case, Carrie’s trip back home. Of course respirators are allowed, and as you’ll see in this article discussing Carrie’s ordeal and the respirator stipulations for flight in general – Airline bumps disabled passenger – you’ll see its an effing quagmire.

The solution is FAA-approved stickers, but they have yet to be made. When they are, they will be used on equipment like this. But in the meantime, unacceptable things like this are happening. Delta at first only coughed up $50 ticket vouchers for Carrie and her two nuses, but once they heard the incidient was going to be picked up by local media, they offered full ticket refunds and a $900 voucher.

Sure, Delta deserves a chiding for having ignorant employees. But Delta can’t control the brain cells of every one of their underlings. What they should be chided for however was failing to admit their mistake right away, and not giving the incident proper credence until they knew it’d be in the news. FAIL.

I talked to Carrie last week. She’s thrilled her story is getting the attention it deserves, and hopes it hastens the FAA to resolve this issue promtly. Hopefully the next time she flies, she’ll be able to focus on having a super fabulous trip with her respirator nothing more than a carry-on concern.