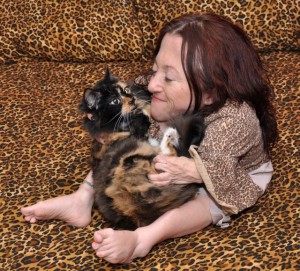 In episode #82 of No Free Rides, Tiffiny is joined by Jane Hash, a fun-loving woman with Osetogenesis Imperfecta who hosts her own podcast and is making a documentary about her one-of-a-kind life.

As a practicing pagan and certified herbalist, not to mention being only 2’7″ tall, to say Jane Hash’s life is “unique” would be a understatement. Her badass attitude and dark humor make her one of my favorite guests yet. The cajones she has to be who she is, openly and with no apologies, is an example for everyone. Jane is also a political activist, a blogger and is finishing up filming a documentary about her life that’s taken nearly 3 years to complete titled, Plain Jane.

Also in this episode, Tiffiny talks about two of her recent blogs, including her blog on the creepy documentary that discusses disability in North Korea, The Red Chapel, and the upcoming reality show featuring four women who use wheelchairs that’s premiering on the Sundance Channel in April – Push Girls.

Use the player below to hear the show (56 minute run time). No Free Rides is sponsored by EasyStand.com.

– Jane’s blog: The Adventures of The Gimp Avenger

– Jane’s podcast: Hashing It Out With Jane for KUSF-In-Exile

– Watch the trailer for her documentary: Plain Jane