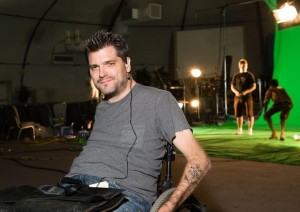 In episode #86 of podcast No Free Rides, we’re joined by Peter Soby, a quadriplegic writer, director and film producer from L.A.

With a face that’s easy on the eyes and a creative force that can’t be ignored, Peter has paved his own niche in Holllywood.

In this episode, Peter and Tiffiny talk about his big move (and maybe insane idea at the time) to move to LA from Chicago, which was long before the internet (and as a C5 quad isn’t easy).

They also discuss working in the industry as a wheelchair-user, his love of Mad Men, even how he was taunted by paraplegics in college (yes really). You won’t want to miss this episode.

Use the player below to hear the show (60 minute run time). No Free Rides is sponsored by EasyStand.com (show archive)

– A short he made for the 2008 Dances with Films Festival: “The 30 Second Mobius Time Machine”