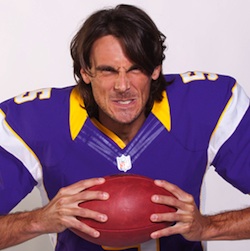 And even though that in itself was really cool (myself, and two other guys with SCI were invited), we had tacos, there was a whole film crew there so that was pretty exciting…Chris Kluwe, the outspoken Vikings punter (NFL for those unawares) was there. He’s been in the national news lately for supporting gay rights, despite not being gay himself (his brother-in-law is). There is an ammendent up for vote in MN next week that would make gay marriage illegal.  He wrote a scathing article too to a politican from Maryland who tried to tell the owner of the Raven’s to not let their players speak out on gay rights. It’s modern day segregation, and he’s right.

But he wasn’t at the filming that night because of that. He was in a wheelchair, and not because he was injured or anything, but because he wanted to spend a day in a wheelchair to see what it was like and to bring attention to spinal cord injuries. He came rolling in with his posse (in a manual chair). The table was already crowded with the three of us “real” wheelers. It wasn’t easy manevuring everyone so we could all fit around the table, but Chris refused to stand up to make it easier. “No, I want to really experience it,” he told me.

After he parked across from me, thus began our group’s hour long meal; chit-chatting, trying to pretend there wasn’t a whole film crew filming us as we tried to just “naturally” eat dinner together. It was a trip. I went into journalist mode of course, and asked him a million questions. I was especially interested in how his wheelchair experience had been going. The first thing he told me he noticed after being in a chair all day – that his butt and legs were numb.

I then complimented him, telling him how very cool it was the he was even doing this. “How many other NFL guys would do this?” I said. “Yeah, but it’s only one day,” he replied. “That’s better than most people,” I said. And he couldn’t disagree. I do know of a retired NFL player, Ray Crockett, who did something even more hardcore – he spent 30 days in a wheelchair for the TV series “30 Days” (hosted by Morgan Spurlock). Check it out

After dinner, and learning he’s a huge geek, loves D&D, plays Word of Warcraft and only started played the bass in real life because of being really good at Guitar Hero (video game), Chris went off to play quad rugby at the Courage Center (a local rehab center), and then to play bass with the band Treading North, a local band fronted by a C6 quad, Gabe Rodreick (his dad is the one behind the documentary in fact).

Gah…so cool. I love there are still decent celebs in the world like Chris, people who care enough to get involved in issues that don’t directly influence them, but know if they do, it can help out the cause so much.

The City Pages (a local paper) did a great write-up of Chris’ day-long escapade, including me being referred to the “bubbly blonde in a wheelchair” (apparently being conversational makes you bubbly). Meh…could be worse. Check it out here: Chris Kluwe Takes a Stand

Are you a fan of Chris Kluwe? What do you think of celebrities getting involved in the SCI cause? Do you think spending a day in a wheelchair can give anyone more insight, or is it too short?