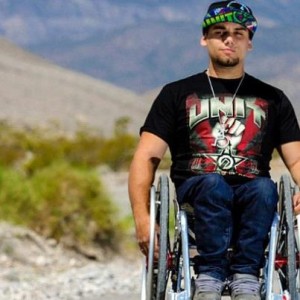 “Just when you thought sitting was safe” is Aaron Fotheringham’s awesome tagline. Touring with the Nitro Circus (an extreme sports tour), speaking and doing demos at events and at school, such is the life of your-not-so-average 20 year old from Las Vegas, the very brave soul behind the world’s first wheelchair back flip.

Aaron was born with Spina Bifida, but could never just sit. Wasn’t his thing. After being adopted into a close-knit family as a baby (they adopted 7 kids in total), they’re the reason he’s the extreme adapted athlete he is today.

One of his brothers was into skating, and Aaron would always come along and watch…

After watching everyone have all the fun, at 8 years old Aaron decided it was time to stop watching and he gave a quarter-pipe a taste of his wheels. Sure he fell, but the rest is history. Read this entry