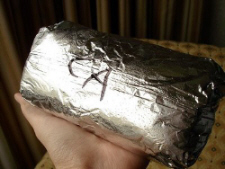 Whatever you do, don’t get between a man and his burrito. You’d think someone who makes burritos by the millions would know this truthitude, but no, Chipotle managed to make this faux pas with their truly thoughtless counter design. Their high counters have been getting off scott-free for years, violating every ADA law in the book, and FINALLY, finally they’re being (legally) chastised. But only in California, for now.

The pissed AND hungry wheelchair-user we have to thank is San Diego State University professor Maurizo Antoinetti, who became a paraplegic in the Italian army. He began his crusade against Chipotle in 2005 after he realized he couldn’t see a damned thing. He couldn’t see which ingredients he was picking, couldn’t see his burrito being made….nada. And might I add how much I hate this?? Fucking Chipotle. I’m lucky, my chair has an elevator seat if I really want to see my burrito being made, but the line is so fast and rushed, it just isn’t practical.

I love your burritos Chipotle, but your counters can suck it.

Professor Antoinetti in completely in the right. He believes every wheelchair-user has the GOD GIVEN RIGHT to see his burrito being made, and he’s right! And while California courts have been disappointing as of late (Prop 8), they finally got it right this time, with a Federal Appeals court in Pasadena ruling Chipotle violated the Americans with Disabilities Act at two of its San Diego locations. And Antoinetti didn’t do it for the money. He said he’s spent over $500,000 on the multi-year legal battle. Here’s what Chipotle had to say after the battle:
“We respectfully disagree with the court’s ruling, however, the matter is largely moot because several years ago, independent of this lawsuit, we retrofitted all of our California restaurants with a new counter design that eliminates concern regarding wheelchair accessibility.”

So let me get this straight – they knew the counters were too high, fixed them at two locations to appease Antoinetti, but why don’t they replace all of their counters across the country if they know they were too high?