Darius Glover is one of those tough as nails paraplegics we keep seeing more and more of. Why is he awesome? He’s the first paralyzed motocross racer to ride in a AMA (American Motorcyclists Association) sanctioned race, proving that yes – you can be paralyzed and still be competitive on a bike. So incredibly rad.

But racing from the waist up (he’s a T5 – T9 paraplegic) definitely weren’t in his original plans. Everything changed when at the age of 15 (while practicing for an upcoming race at the MX track “Field of dreams” in 2006), Darius crashed his bike on a slick double jump.

But even though his parents were hesitant at first (and even he wasn’t sure he could do it), Darius decided to not give up on his love and was back on a bike again within a few months of his injury. Read this entry 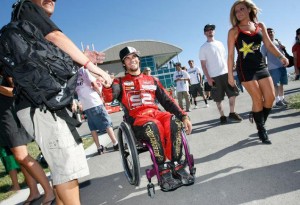