With the tongue-in-cheek gamer nickname ONLYUSEmeFACE, Chuck Bittner is one of the world’s most impressive gamers. As a C5 quadriplegic, Chuck plays console games using only his face and since 2011, he’s been on a mission to bring universal key remapping to the gaming industry.

In layman’s speak – he wants every console game to allow players to change which keys on a controller control movement for gameplay. He has amassed hundreds of signatures over the years, and he’s still pounding the industry hard.

Also a hilarious self-dubbed “can’t stand up comedian,” Chuck has introduced a whole new world into life with quadriplegia. Here is his awesome story. Read more 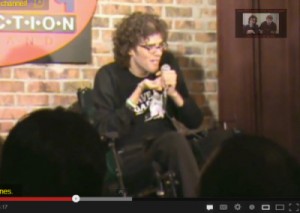 Hair binders to hold a Wiimote, the awesome “Face Gamer” from New Hampshire gets featured in Wired and an accessible Wii Fit board invented by a crafty Canadian para. Sweet! I love accessible gaming ♥

And if you don’t know who Chuck Bittner, aka the “Face Gamer” is (he was featured in Wired magazine & is THE leading accessible gaming advocate), this is your chance to get edumacated. Read this entry