She’s the one and only woman with a spinal cord injury to pose in Playboy (the June 1987 issue to be exact), and yes, it desperately needs to be repeated.

See what Ellen Stohl is up to these days, including working as a professor at Cal State Northridge. Read this entry

Hi, my name is angel and I’m a 19 yr old college student in Buffalo. Many of my friends have had a dating life; some are engaged. It always made me feel socially behind. I felt like i’d be in the “always a bridesmaid , never a bride situation.” I’m tired of that now. So I’m gonna try dating now. 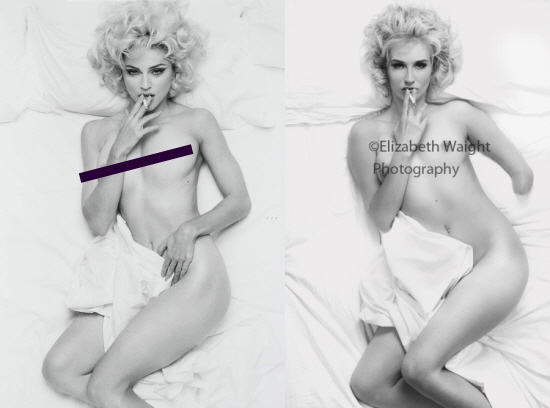 Have you ever wanted to try modeling and live in the UK (or can get there easily)?

There is an upcoming photography project looking for you, searching for disabled models (and absolutely no experience is necessary).

Elizabeth Waight, an able-bodied photographer in London, is the creative mind behind this exciting project which she has beautifully called ‘ICONIC?’ (the project has been copyrighted).

The purpose of the project: “To subvert the current obsession with physical perfection” by recreating iconic photographs (from the last 100 years), but using people with disabilities instead.

So far Elizabeth has already created a couple of images to get the public excited about her project.  My favorite is her recreation of the famous Steven Meisel black and white image of Madonna (where she’s lying on a white sheet, nude, smoking a cigarette).

She used Kelly Knox, a disabled model born with only one arm forearm, as the disabled representative of this image, and it turned out stunning. Read this entry

In this episode, Chelsie and the girls dish on men (sex in the chair revealed!), three of them perform hip-hop at the Abilities Expo (and overcome a move gone wrong) and Angela finally finds a casting agent who thinks she has a real shot in the modeling industry. This is my favorite episode yet (by far).

Episodes 7 begins with the utterly adorable (and god damn is she in good shape) Chelsie rolling up to Auti’s house for a dance practice session with Auti and Mia (for an upcoming performance at the Abilities Expo in San Jose), for their wheelchair hip-pop wheelchair dance group, Colours ‘n Motion (“Auti’s Wheelchair Dance School.” Why doesn’t this exist yet?)

I like how Chelsie admits that after injury she wasn’t interested in wheelchair dance. “I thought it looked weird.” “But then I met Auti and it all clicked.” If anyone can prove that it’s not stupid, it’s Auti.

While they’re practicing, can I just say that Mia looks overwhelmingly cute in her uber-long braided pigtails?  I don’t care if she’s 33.  She can pull them off like nobody’s business.

After practice, they nom on some store bought sushi as they discuss their big performance (this will be the first time many of Chelsie’s friends and family see her dance in her wheelchair). “It’ll be the first time, like, you know, instead of like on videos and stuff,” she says.

In this episode, Angela tries to teach herself to pain again and dols out some killer advice to the ladies. Meanwhile, Auti is stressing out about not being able to *stay* pregnant and visit’s a fertility doctor and Tiphany and her girlfriend Miyoko see some rough seas.

This episode had A LOT going on. Let’s start out with Angela, the quad of the group. She decides after 10 years to try to paint again. Watching her struggle holding a brush with quad hands was fascinating. It is not easy learning how to still use paralyzed fingers. Been there. But why did she wait 10 years?

Auti, the 42 year old paraplegic of the group, gets a lot of screen time in this episode. I love what she said about her husband Eric. “Some people are surprised to see an able-bodied man with a woman in a wheelchair, but I‘m spoiled; I like to be carried.”

And I love Auti’s dog Bats, a French Bulldog. She makes “rolling” a dog look so easy. But this episode is all about Auti and Eric trying to get pregnant. She reveals she had an abortion after her injury. “I would’ve had an 18 year old by now,” she cries.

Her mom died of cancer right after her injury and she was in a rough spot (hence the abortion). And now Auti and Eric are having a hard time getting pregnant, they’re worried (well Auti is) that she might be infertile.

I wrote more about what “Push Girls” means to me for Easystand. Check it out:

Push Girls premiered last Monday, the new reality show on the Sundance channel profiling four “hot babes” in wheelchairs. As a babe in a wheelchair myself (hey I’ve been called that), this show is the televised messiah I’ve been waiting for.

The show’s premise – showing the world that you can still be beautiful, have a full life, a great job, have men that want you, and still drive a fabulous car (has been my personal goal since my injury).

You have no idea how frustrating it is for people to be shocked when you can achieve any of these things. A “push girl,” so say the shows producers, keeps on pushing despite anything that comes her way. I kinda like it. Read the rest of this entry…

The Sundance Channel aired a 12 minute sneak peak of the Push Girls last night, and holy crap you guys, it looks better than I had hoped.

It’s not cheesy, it doesn’t have that “whoa feel sad for these girls” type of feel. No, the show has hit the nail on the head. I officially love the Sundance Channel for making this show. There I said it.

Hitting on guys when you’re out at the club, real life with your man in bed (“Yes I can have sex. Lots and lots of sex”) to being obsessed with wearing high heels even if you can’t walk, seeing all of this glossified on the small screen is very, very cool, especially for me personally; it’s like my life, but with a way less cool car (and I’m just glad to see a positive yet real portrayal of women with spinal cord injuries in the media for once).

In the sneak peak, you meet the four women starring in this new reality show, Tiphany, Auti, Mia and Angela. My impressions:

– Auti, a woman I’ve admired in the disability community since I was injured and have always coveted her rock-hard abs, turns out to be surprisingly funny. Who knew? (and I think she may be my favorite).

– And it is revealed that Tiphany, a gorgeous paraplegic (who I interviewed for an article I wrote in Penthouse last year called “The Would You Girls”), is now dating a woman. Crazy talk!

– And Mia, she’s super cute; love the clip were she’s rating guys as they walk by….