Slingshot Golf is an adapted sport for folks of ALL SCI levels. An able-bodied assistant, and specialized slingshot and pendulum are required. See how it’s played as demoed by Josh Basile, a lifelong golf junkie and C4-5 quadriplegic who created this sport. Click to watch

The people of France have long been obsessed with aviation. From sponsoring the Wright Brothers to perfecting the hot air balloon, the French love to take to the air.

This is why it should come as no surprise that Dorine Bourneton, a paraplegic and French woman, made history as the first woman with paralysis to receive her acrobatic pilot’s license in the world.

But it wasn’t easy getting where she is today. From her injury that also occurred in the skies to receiving her professional pilot’s license post-injury, Dorine has one indomitable spirit. Read on for her amazing story

A roboticist with a focus on drones, one of the best accessibility consultants on the planet and a well-known speaker who’s shared his thoughts with the likes of TEDx and WIRED, Stuart Turner is without a doubt one of the most tech-savvy quadriplegics in the world.

Also the founder of RobotandCake.com, a site dedicated to illuminating the importance (and possibilities!) of integrating robotics into assistive technology, Stuart is one impressive Brit. His main drive is to open up the world to people with spinal cord injuries.

A man with an eye to the future in a profound way, this is the amazing Stuart Turner. Read this entry

In the vast world of treehouses, only a handful are wheelchair accessible. It’s not easy putting a ramp into a tree, especially if you’re following ADA ramp-grade guidelines, but the good news – it can totally be done.

Whether it’s Treehouse Masters, the reality show that follows Pete Nelson and his treehouse crew, to something a bit more inconspicuous like a park in Illinois, just know that it’s possible. Read this entry

You’ve likely heard of Stephen Hawking before, but have you heard of Sang-Mook Lee? Called the “Stephen hawking of Korea,” Sang-Mook is a world famous oceanographer and professor from Seoul National University. He’s been studying the ocean on the earth beneath it for years, and he’s only been paralyzed since 2006.

Sang-Mook’s story is one of the ages. He may have been injured at the height of his career, but he fought hard to get back to his everyday life. Within six months he was teaching again, if that gives you any idea of the dedicated and true scientist that Sang-Mook truly is. Read this entry

So many DIYs (do-it-yourself), so little time; that is the theme of all of the awesome homemade videos being made by people with spinal cord injuries. They can sometimes make what they need, and save a bunch of money in the process. We’ve profiled some awesome DIYs in the past, and we’re at it again.

In this installment we’re profiling some impressive custom wheelchairs, as well as an art project almost anybody can do at home (and definitely something fun to do over the winter).

If you’re looking to save money, these are the videos you want to watch. Read on for three brand new DIY videos to hit the web from people with spinal cord injuries. Read this entry

Leaving the hospital after a spinal cord injury is one of the most stressful things anyone can endure. Everything is completely different and you must relate to the world in a whole new way. This is especially true with your home.

For many of us, our favorite room or activity in our home is no longer possible, and it can feel pretty lousy on top of everything else we’re already dealing with.

For this post we’re specifically talking about accessible modifications in apartments – they’re some of the most popular forms of housing for many people with SCI, and there are many things you can do to an apartment despite being a renter. There are some great accessible apartments that come by default too.

Check out three of these apartments below, and some great DIY’s (bike handle grips used to hold a toothbrush!) to help take your place to the next level. Read this entry 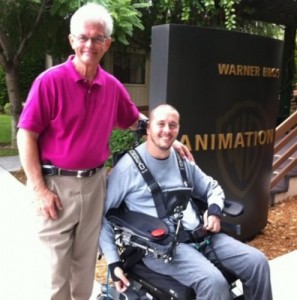 The “mad scientist” of adapted technology, Mark Felling, Engineer, Patented Inventor and Founder of adapted gear profferer Broadened Horizons, is a quadriplegic on a mission.

Ever since crashing his experimental plane a decade ago, he’s been determined to use his engineering skills to make his life, and other’s like his, easier.

From a powered tenodesis hand splint he calls the “Power Grip” to some of the best adapted video game equipment ever made, this is the story of Mark Felling, the man who never stops dreaming. Read this entry

Everyone has an opinion on dating, but not everyone has one when it comes to the wheelchair side of things. Most people, let’s be honest, don’t even think about wheelchair-users in the realm of dating, but the truth is that many of us want to date or are currently dating. We too are in need of dating advice.

Fortunately there are a handful of wheelchair-users who love doling it out. They may not be as plentiful as the Dr. Ruth’s of this world, but they’re out there and they’re recording their advice just for you; and w00t, they’ve made some amazing videos.

Straight from the heart advice coming right at ya, here are three unforgettable videos from wheelchair-users on the sticky topic of wheelchair dating. Read this post