In Jarrett Martin’s world, the place he loves to be the most is in the sky – free-falling at 100 miles an hour with the wind in his face. But after his injury five years ago, he feared the one thing he loved the most would no longer be possible.

Jarrett grew up in a family-run skydive business; skydiving was and still is in his blood. The notion of no longer skydiving was never something he was willing to accept, and he never had to. Within months of his injury he was back skydiving, but the AMAZING thing about Jarrett’s return isn’t just the fact that he’s back in the sky, it’s everything he’s also done and making history in the process.

To find out all the things Jarrett has been up to since his spinal cord injury, read this post

There are a lot of awesome things about Canada, and Rick Hansen is one of the coolest things about this beautiful place. This positive man’s journey post-injury may have began in athletics (and boy did he kick butt there), but that’s not where his resume ends; it’s where it begins.

To millions of Canadians, Rick is known as the “Man in motion” for an amazing 40,000 mile journey that took two years to complete, wearing out 117 tires and 11 pairs of gloves in the process. Read this entry 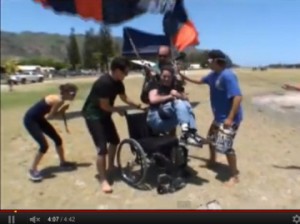 Wheelchair skydiving (watch the world’s first paralyzed woman with her solo license), wheelchair paragliding while still IN your chair, and accessible hot air balloons with lifts oh my! Watch these videos